I had a request to post some information about the long weekend, and had a couple of things to post myself, so here it is. All in one post.

Which leads me to my next point. The horseshoe tournament is on Sunday, NOT Saturday as I have previously posted. I’ll have to go through my emails and correct the information I sent out. Oops.

Also, we have had a few cancellations and we have also added 7 more unserviced sites. So if you are interested in camping with us next weekend or you know someone who is, then give us a call. (902) 644-2654.

And to recap the activities next weekend.

And if you are still reading, The Kevin Beanland band is playing tomorrow night (29th) in the Shelter. So come on out and listen to some music.

Just giving everyone a heads up that might read the blog that the power went out at the campground at about 3:45 this afternoon.

A little after 7pm NSP showed up to do an assessment. He told Luc that the maintenance truck would be another couple of hours. That they were currently in Mahone Bay. Had a stop on one of the Crossroads of a downed power line, and that the campground was the next stop.
I’ll update this post when I hear anything else.
8:46pm – NB Power is there
9:10pm – We have power. YEA!!!!!

Regardless of whether Hurricane Bill makes landfall in Nova Scotia or not. There’s a good chance it’s going to get close enough to give us some really strong winds.

Here are some suggestions to prepare your trailer before you leave on Sunday.

If anyone has any additional tips they’d like to add, feel free to do so in the comments.

I’d like to confirm peoples reservation for that weekend. We have a long waiting list, and we’d like to be able to accommodate them if people that are already booked are not going to be able to make it.

If you have a reservation and have not yet confirmed please give us a call. (902) 644-2654
If you know someone that is booked for that weekend, can you either ask them to call us to confirm or provide us with their contact information so that we can call them.
If you are not able to make it, please let us know so that we can fill your spot.

We greatly appreciate your help in this matter.

Lahave River Campground had their annual parade tonight. We didn’t have a huge turnout, but the parade watchers sure had a ball watching it.

Here are some pics. 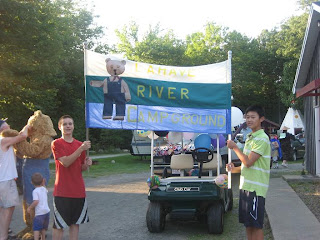 The boys leading the parade with the Lahave River Campground flag 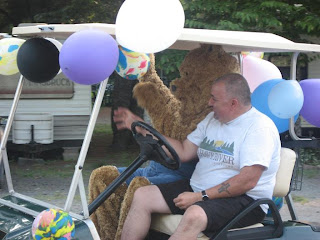 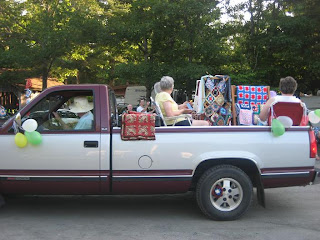 The ladies from the stitch and bitch showing off their wonderful quilts and afghans. They were even throwing candy to the crowd. No wonder they took first place. 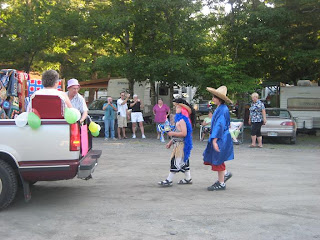 Here are a couple of kids dressed up. One is dressed as a mexican, and I didn’t catch what the other kid was dressed up as. 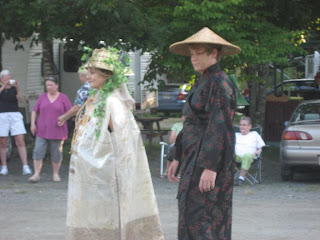 This is Richard and friend. He was a rice picker, and she was a bag of rice. They won third prize. 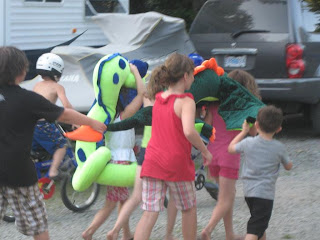 Some kids joined in the parade once it got under way. 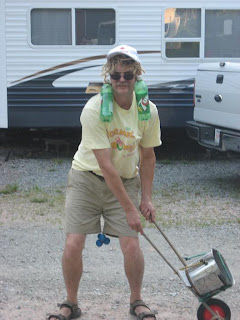 Ah yes. Our second place winner. He was the wild thing. He got a big roar from the crowd.

That was our parade this year.

I know I’m behind in my posts, but I wanted to post this really quickly. As campers we really need to be aware of the danger of lightning, and what to do about it.

This article is posted in the Chronicle Herald today.

BRAMPTON, Ont. — Two young boys were rushed to hospital in critical
condition Wednesday after seemingly harmless overcast skies flared abruptly and
sent a lightning bolt crashing into a Toronto-area soccer field.
The mother of one of the boys, ages 4 and 6, was in stable condition following the
lightning strike in Brampton, Ont., some 45 kilometres northwest of
Toronto.

As part of that article there is some information and facts.

WHAT YOU SHOULD KNOW

•Lightning is attracted to tall, isolated objects like trees.

•Metal does not attract lightning, but is a prime conductor, as is water.

•Two-thirds of all lightning strikes occur in June, July and August; most occur in the afternoon.

•A large proportion of lightning deaths occur in, on or near open water. Many people also die sheltering under trees.

•Nowhere outside is safe from lightning.

WHAT YOU SHOULD DO

•When inside your home or other building, avoid using a corded telephone, except for emergencies. Cordless phones are safe.

•Practise the 30-30 Rule: When you see lightning, count until you hear thunder. If it’s 30 seconds or less, the storm is within 10 kilometres and dangerous. Seek immediate shelter. Wait 30 minutes after the lightning has stopped before going outside.