This was soooo yummy. And so easy to make.

I had a taco salad at Wendy’s last week and it was so yummy that I thought I’d give it a try camping. It is one of those meals that doesn’t take long to cook. It takes minimal ingredients, and kids love it because they get to dig in with their hands. And really. Who doesn’t love nachos and dip.

First step is to make chilli. Or if you are prepared, you made it at home and froze it, to keep other food in your cooler cold.

1 lb of ground beef
1 can of kidney beans
1 can of crushed tomatos
1 pkg of chilli seasoning.

Brown the ground beef. add the kidney beans (drained), the tomatos and the seasoning. Heat it up, and you have chilli.

I also added onions when I cooked the beef. You could add chopped green peppers too, if you are so inclined.

For the rest of the salad, you will need

To put it all together

Put down a layer of lettuce, tomato on top of that, then a handful of the cheese.
Put a couple of spoonfuls of chilli on top of that.
Top with a spoonful of sour cream and salsa.

Eat it up with the nacho chips. Well, ok, you can use a fork, but where’s the fun in that. 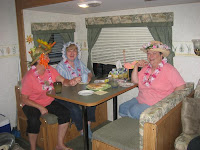 Yes. We do. We have our very own Golden Girls.
These ladies get together on Saturday night and have a little party with their hats.
A different hat and a different trailer each Saturday night. 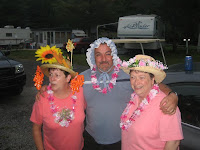 Wait a minute.
That’s not a Golden Girl.
In other news….
We have our new road signs up. Campers shouldn’t miss them now. 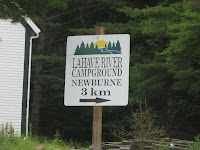 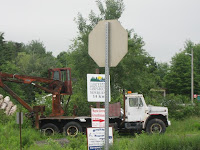 Everybody loves looking at the stars. I’m sure we all will enjoy it more once we actually get to see them, instead of clouds. I thought I’d start a series on constellations and other celestial bodies. What they are, what they look like, where they are, and some folklore that surrounds them.

The Big Dipper is known as different names in different countries. Ursa Major is latin for Great Bear. It’s also known as The Plough, The Butcher’s Cleaver, The Great Bear and Carl’s Wagon.

The Big Dipper is made of 7 stars. Three make the handle of the dipper and 4 for the pot. By following a line from Merak and Dubhe, the outside stars of the pot, you can find the North Star. If you are standing facing the North Star, you are facing North. Ship Navigators have been using the North Star to guide them for centuries.

In Greek mythology, it is said that Zeus swept Kallisto, who had been turned into a bear by Zeus’ jealous wife Hera, and her son Arcus into the sky. Kallisto is the Great Bear, and Arcus is the Little Bear (Ursa Minor)

Using the Big Dipper as a starting point we are able to find most of the other constellations.

The golf cart’s been stolen.

The suspect is about 5’8″, blonde hair. Last seen driving a green golf cart, and driving around Lahave River Campground.

If you see the suspect make sure to approach him.

REWARD: A good time to be had by all. 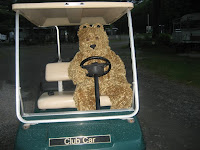 I just wanted to send out a congratulations to John Snyder.
John is one of the top ten finalists in the CMT Karaoke star for Halifax. The competition took place on June 16th and 17th at the Rodeo Lounge.
If you were hanging out at the shelter on the Saturday night that we had the company campout. John brought his guitar, joined the rest of the gang and sang along and entertained us for awhile.
Congrats John, and good luck with the rest of the competition.
If you are interested in following the competition and online voting, log on to http://www.cmt.ca/kstar

I’ve always had problems with foil packets. Especially with potatos. They always, always, always stick to the foil and you end up either eating foil (so gross) or wasting half of the potatos. It does

n’t matter how much I prepared the foil with butter or oil or precooked the potatos, they always stick.

The cure, is bacon. I still get a few stuck, but nowhere near wasting half of them. I just chop up a few slices of bacon and put some down before I put the potatos and whatever else I’m putting in the packets, and then put some on top. And the bacon flavour really does well mixed with the veggies too.

Other suggestions for foil packets are;

Let me know how your foil packets turn out.

You know what they say about singing in the shower. Well the women’s bathroom was just a ringing with the tunes last night. HA. Barb, Debbie and Melanie decided to regale us with their rendition of Delta Dawn. Great job ladies. Grand Ole Opry here you come.

Delta Dawn, what’s that flower you have on
Could it be a faded rose from days gone by
And did I hear you say he was a-meeting you here today
To take you to his mansion in the sky

Delta Dawn, what’s that flower you have on
Could it be a faded rose from days gone by
And did I hear you say he was a-meeting you here today
To take you to his mansion in the sky

I thought I would put together a list of songs to sing around a campfire and play guitar too.

The requisites are that the songs have to be songs that most people would know.

Here’s what I have so far. Add your own in the comments, I’d love to hear what you like to play and sing. 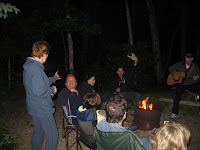 The weather sure did cooperate for Neocon this weekend. It rained Friday night overnight, but Saturday was rain free. And today was beautiful. A sun shiny bright day.

There was campfires and guitar playing and lots of great conversation. And the food. There was so much great food. If memory serves me correctly, Mike got the only yellow card of Friday evening. LOL.
Saturday had the adults playing horseshoes, and the kids playing mini-golf. 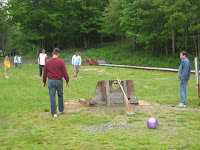 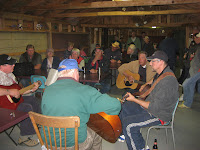 Even the shelter was hopping busy with guitar playing and singing on Saturday night.

On Sunday mornings, a group of the seasonal camping ladies get together for their Stitch and Bitch club. They make afghans and blankets and donate them to different org 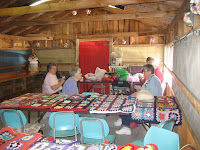 I’m sure I forgot a few things, but that’s the jist of it, I guess.

Neocon from Dartmouth, is having a social committee camping night on Saturday night at our campground. Barbecue. Roasted marshmallows. And I hear there might even be some guitar playing.

I hope they have a great time and that the weather is accommodating.